Your session will expire in 2:00 minutes
Skip to Main Content

Established nearly two decades ago, these awards honor our agents' success and causes or organizations significant to them and their community.

Each year, Catholic Order of Foresters' top 20 agents earn Richard Tobin Benevolence Awards. These awards, established in 2006, are made possible through Catholic Order of Foresters' Welfare and Relief Fund. The late High Chief Ranger Richard Tobin created this fund to allocate money for fraternal good. Each agent who earns a Richard Tobin Benevolence Award chooses a Catholic organization to receive the $500 donation - schools, religious groups, pro-life causes and more from around the country have been named as recipients. To date, $143,500 has been donated to local and/or Catholic organizations as a result of these awards. 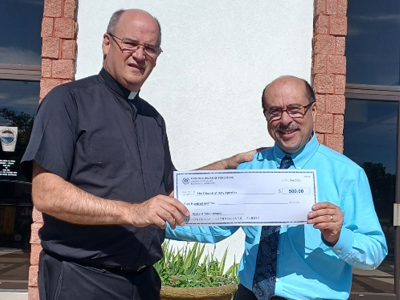 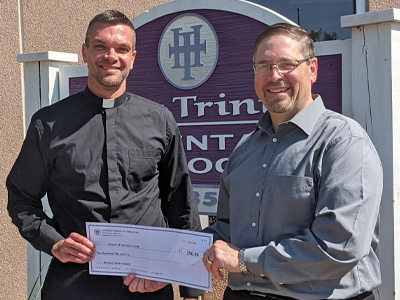 Brian Marketon
General Agent Brian Marketon, right, donated half of the proceeds from his Richard Tobin Award to Holy Trinity Catholic School. The Rev. Matthew Wiering, left, accepted the donation on behalf of the school. "[Holy Trinity] provides a great Catholic K-12 education and can always use the support," said Brian. "I was honored to be an award recipient this year." 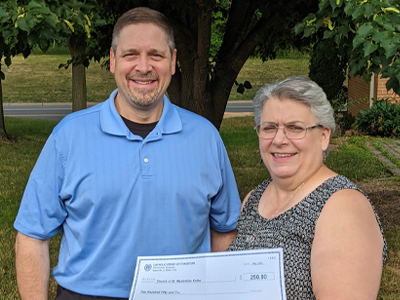 Brian Marketon
General Agent Brian Marketon presented the second half of his Richard Tobin Award funds to Mary Ziebell, principal of St. Maximilian Kolbe Catholic School in Delano, Minn. The funds will be used for tuition support and supplies for students and teachers. "The school is adding a grade next year," said Brian, explaining that he's happy to "support Catholic education in a growing Catholic school." 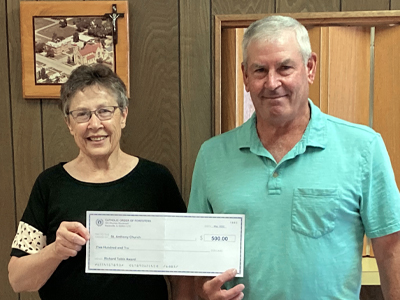 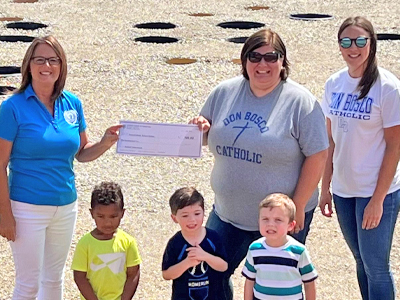 Janet Woods
General Agent Janet Woods donated the funds from her Richard Tobin Award to St. Joseph Preschool in Raymond, Iowa. The donation helped subsidize the school's new playground equipment. "It's important to keep Catholic school enrollment up so we can afford to give families the choice of a Catholic education," said Janet. "By starting [young students] out as early as preschool, there's a much better chance that they will continue in the Catholic school system." 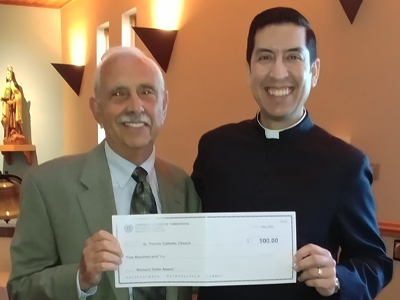 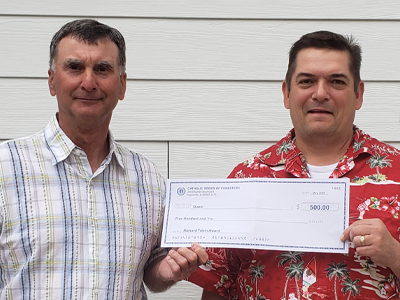 Kelly Mauer
Agent Kelly Mauer, right, donated the proceeds from his Richard Tobin Award to Quest. Randy Wolken, left, is a volunteer with Quest, which is a weekend retreat for Catholic students. "My daughter recently attended a Quest weekend and had a very enjoyable experience," said Kelly. "Quest is where young people seek out a deeper understanding and appreciation of themselves, others, and God. It serves Catholic youth from all over northeast Nebraska and beyond." 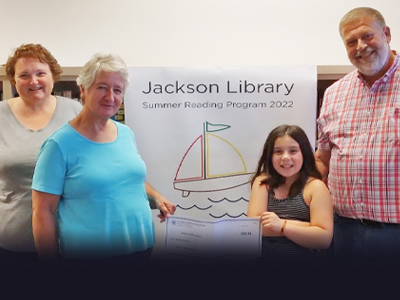 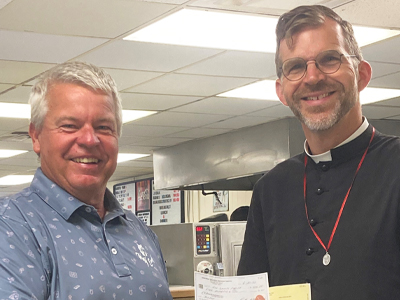 Rick Niklas
Agent Rick Niklas, left, donated the proceeds from his Richard Tobin Award to the Rev. Jonathan Meyer, right, pastor at All Saints Parish in Guilford, Ind. The funds will be used to support Rev. Meyer and 67 students from All Saints Parish who will attend the 2023 World Youth Day in Lisbon, Portugal, with millions of Catholic youths from all over the world. "It's uplifting for the attendees to be surrounded by so many Catholic youths of all nationalities and backgrounds," said Rick. 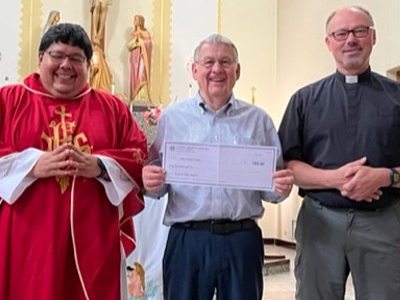 Roger Klein
Agent Roger Klein, center, pictured with the Rev. Arturo Vigueras, left, and the Very Rev. Sebastian J. Kolodziejczyk, right, donated his Richard Tobin Award to the Holy Family Parish Pro-Life Fund in Arcadia, Wis. "I firmly believe in protecting the lives of the unborn," said Roger. "In a society which seems to choose convenience over the sanctity of human life, I wish to stand and speak for God's gift of life." 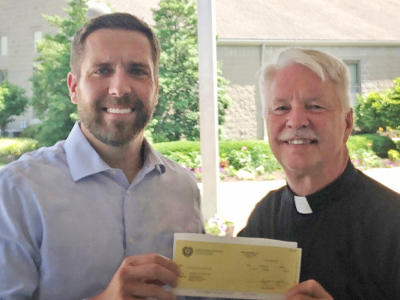 Ryan Maschmeyer
Agent Ryan Maschmeyer presented a check with the proceeds from his Richard Tobin Award to the Rev. Rick Bolte, pastor at St. Timothy Parish in Union, Ky. "The proceeds are supporting the adult education committee at St. Timothy," wrote Ryan. "The parish has had limited in-person adult education the past two years, so there's a focus on hosting more opportunities that can build community in the parish and engage parishioners on a deeper level." 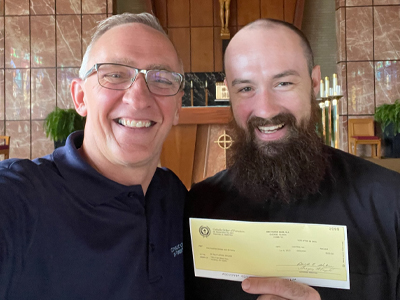 Tom Kaelin
General Agent Tom Kaelin, left, donated the proceeds from his Richard Tobin Award to the Rev. A.J. Gedney, right, of the Diocese of Covington. "He's one of the seminarians we adopted over the last many years," said Tom, referring to Catholic Order of Foresters' Adopt A Seminarian program. "The gift will help A.J. purchase vestments as he begins his priestly vocation." A.J., a former chemical engineer, studied theology at Saint Vincent Seminary in Latrobe, Penn. In June, he celebrated his first Mass at St. Paul Parish in Florence, Ky. 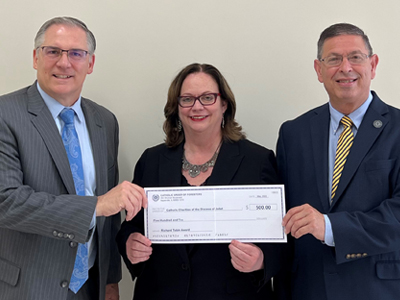 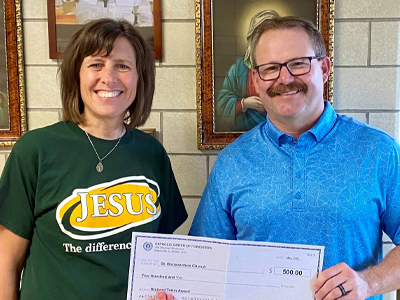