Your session will expire in 2:00 minutes
Skip to Main Content


She dreamed of being a Peace Corps Volunteer (PCV) from the moment her social studies teacher shared his experience serving in Lesotho, South Africa. “From then on, I knew it was something I really wanted to do. Just before graduating, I had a few other opportunities to choose from, but serving in Rwanda was by far the most interesting and challenging,” Nicole shared. “I decided I couldn’t pass it up.”

She's learned a lot in her time serving, which began with a basic understanding of the Peace Corps goals. “We’re here to provide resources to a community so they can provide for themselves better…to a point where they won’t need Peace Corps,” Nicole said.

She lives in a small village in Rwanda. During their dry season, many Rwandan residents walk about two miles to get water. For storage, they use jerrycans, which can hold up to 50 pounds. There are no refrigerators, so Nicole makes all her meals fresh, and uses charcoal and bamboo to heat up water. She walks about 20 minutes to the market every Friday, and it’s customary to always have enough bags to carry your goods. “They’re very modest and don’t show off anything they have,” she said.

The difference in culture is a challenge. Nicole discussed one of her biggest difficulties: respect. “One hurdle I’ve faced - and still work on every day - is demanding respect from men who see me only as a young girl, and not as an equal or capable professional,” she said.

Nicole lives across the street from nuns. Momma Jen, who Nicole considers a mentor, had a new litter of puppies and wanted Nicole to take one. Now affectionately known as “Ty Ty” after Mary Tyler Moore, Nicole’s new dog has begun to ease the fear many people have with dogs in Africa. “The kids ask to take turns holding her leash now! Before they would scream, run and throw things at her,” Nicole said. The new pup will eventually come home to America with her.

We spoke with Nicole’s mom, Kathleen Sparbanie, who is the Compliance and Product Support Specialist in the COF Home Office. Kathleen recently visited Nicole with her younger daughter (Nicole's sister), Taylor. “It was incredible,” she shared. “Seeing how Nicole lives now—I knew she was a strong individual before, but now it is amazing to see the impact she’s had and the work she’s doing there. And the kids love her!”

Nicole teaches 15 hours of English to three classes a week, with 50 kids (ages 12 to 18) per group. The language they generally speak is Kinyarwanda, which Nicole speaks well but is still learning. “When kids grow in confidence, smile in class for the first time or start participating more, that’s what makes me happiest,” she shared.

Kathleen recalled a time when Nicole was discussing her students. “She told me, ‘Being here—I want them all to succeed', and that is all she really wants,” Kathleen said with a smile.

Nicole worked on two programs with her students—RUMPs and Let Girls Work. “RUMPs was a program another PCV did in Rwanda with her group. I met with all the girls who were in the senior group [at the school] and informed them, if they wanted to participate, to bring specific materials to make pads. We taught them how to make and clean reusable pads and did a lesson on menstrual health. They sewed them on their own,” Nicole explained. “They don’t have [medicine] or anything to help [during their menstrual cycles], so normally they miss school during that time. We provided them with ideas to make [that time] more comfortable.”

A student walked over to her the day we spoke with Nicole on the phone and asked her when they were going to sew pads again. “It was so great, because she came up with it on her own! She asked in front of the whole class, too,” Nicole said with pride. Her hope is that the students will continue to teach one another after her time in Rwanda ends.

Another program Nicole introduced was Let Girls Work, a Peace Corps initiative that encourages girls to stay in school and be leaders. “Sam [my Rwandan counterpart] and I taught 13 lessons to the Girls’ Club about creating a rèsumé, interviewing and public speaking,” Nicole said. After the initial lessons, they brought the girls to a nearby city, where they shadowed professional women in fields they were interested in. “I found these mentors for them to work with, and it was amazing. They loved it,” she continued. Then two girls were chosen to go to a three-day workshop in Kigali. They got to stay in a hotel with 20 other girls and attended a mentorship and panels. “I cried a lot that weekend,” Nicole laughed. “It was great to see them interact with other girls their age and learn more about their possibilities.” She also shared, “I have the resources to help as a part of Peace Corps, and I want my girls to lead on their own and their teachers to help them, too.”

Nicole’s time in Rwanda will end in November 2017. Her hard work and sunny outlook are sure to positively impact any journey she embarks on next.

These are the views and experiences of Nicole Sparbanie. This article does not reflect the views of the Peace Corps, United States Government or COF. 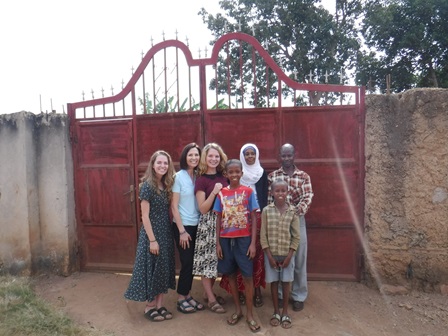 Above: Nicole's families collide! Her mom and sister spend time with her host family in Africa.
Below Left: Ty Ty, Nicole's dog, has helped ease the fear the locals have of dogs.
Below Right: Two students who attended a nearby workshop take a break with Nicole at Kigali Library. 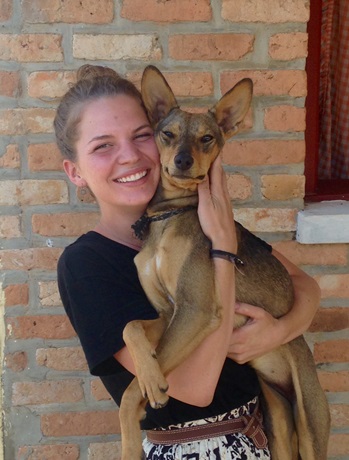 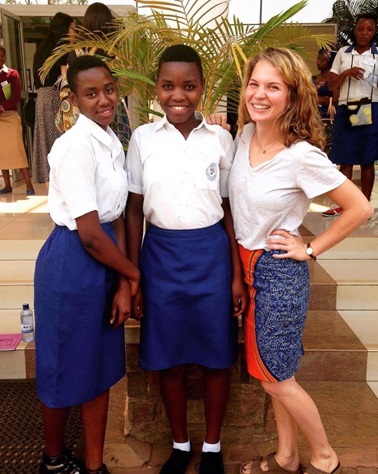